The makings of a perfect day: Friends,Food, Cheesy teenage drama shows, New places, Old memories, and Maybe a little too much to drink.  Ahem.

-Emily and I had our second t.v. marathon/girls day at her apartment last night.  She has me hooked on this show. Don’t judge me. I watch it, I know it’s a giant cheesy unrealistic mess, and I am still obsessed.  Maybe it’s also the blankets and free food and her new puppy that have me loving her place.

I hadn’t had a Capri-Sun in years! I felt like a kid again. 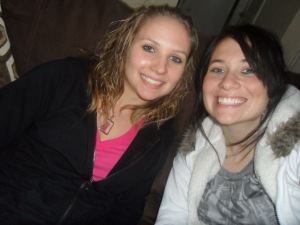 See!? Her puppy is giving me a case of I-need-a-new-dog-now-itis. Then I remember the huge mess left on my floor last night and I remember two is maybe enough.  Em and I aren’t even on season two yet, so I’ll be seeing this little girl grow up, while also watching teenagers have babies and such. Aw. 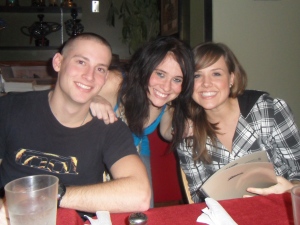 At five I headed home, ready for some good food. I’ve never had Greek food before, and I’ve been dying to try.  There’s an adorable little place in our apartment complex called Zakia’s, and it’s been long overdue that I try this one in particular. Brought along a few friends and the husband and hoped for the best.  Right off the bat you can tell this place is authentic.  The owner is this beautiful Greek woman with a lovely accent.  Secondly, the food. Oh, the food. I’ve never even had a gyro before and couldn’t even pronounce it for the life of me until one of the boys pointed to the top of the restaurant. There’s actually a sign for dumbasses like me! “Yee-Roh.” Oh. Yeah,I was way off. But I knew it was pretty much the Greek-est of the Greek and went for it despite my lack of pronunciation skills.  Oh my Gosh. This stuff was heavenly. You’ve got your pita bread stuffed with beef, lamb, and all sorts of other yummy vegetables and a delicious mystery sauce. I’ve never had lamb before either, and it’s a hearty looking and tasting meat.  I’m pretty excited about this place now.  Not only can I walk there, it’s delicious, AND the staff is awesome.  The waiter overheard me talking about my blog and he wanted to know more about it.  He has the link now so I’m actually kind of nervous. Not only that, the owner overheard me (or saw me taking so many pictures) and commented that I was very interesting and also started asking about my blog. Jeeze. If my words don’t do this place enough justice, here’s some more pictures. 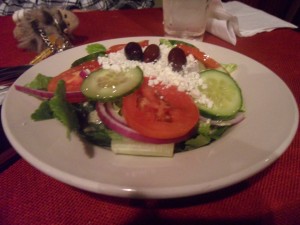 This is actually probably the best and most fresh salad I’ve ever had and I gobbled it up pretty quickly.  I usually don’t even like salad, so this says something. I think what made it so delicious was the creamy mint sauce. Mint! Mmm. My mouth is starting to water.

This appetizer was probably second place or even close to tying for first. Buttery, flaky melt in your mouth on the outside and inside you have your spinach and… I think feta cheese? Ah, crap. Whatever it was, it was damn good.

That’s my gyro. It came with a yummy seasoned rice too. I had leftovers that I think I’m about to go warm up now. 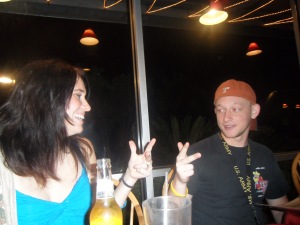 I was proud of this picture. Matthew refuses to take pictures so I had him do some pretend finger trick game with me,while Tessa snapped a quick one. Hee. What I’ll do to get a picture.

Oh, and the night’s not over yet, girls and boys.

Tessa,Allen, Robby and I headed over to the downtown area to have a ‘couple’ of drinks and have fun with the friends. A couple turned into more than a couple for everyone but Allen, who was our very responsible d.d. I feel the need to let everyone know we had a d.d… Because we definitely needed one. The night consisted of  pianos, Bailey shots, laying in bed, the first and best Nintendo ever made, and a lot of laughs. You need a visualization, don’t you?

The girls. Tessa intimidates me in this picture. 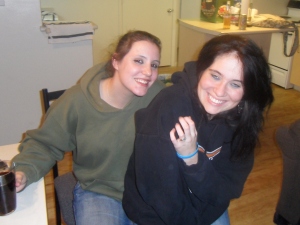 Nikki and I became pretty fast buddies when she was visiting her boyfriend Topher in good ole Texas. Now she’s here for good! Excited.

DONKEY KONG! I was so ecstatic when I saw they had this Nintendo I let out “You have the special box!!!” Jason laughed hysterically and told me I was five years old.

Speaking of Jason. Notice the three couples. And then… 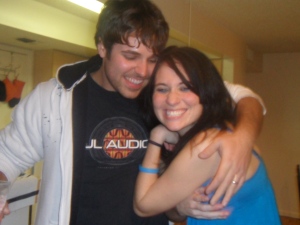 My drunken self found it rather amusing anyway.

So there you have it. Bed-laying, 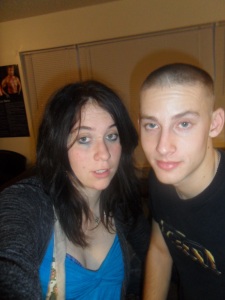