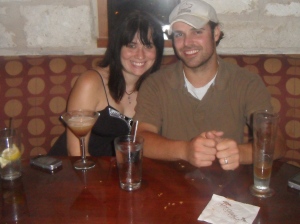 I suppose you all know I love my husband.  He’s the happi to my -ness, the butter to my bread, the one who completes me and understands me most and bla-de-bla. I don’t really like going on and on about this love stuff all of the time because, uh, I married him. Hopefully I really like the dude a lot. He makes me super duper happy, and I’ll leave it at that. So while I save the lovey-dovey-gaggy-stuff for him, I thought I’d give you some great reasons to get married….That have absolutely zilch to do with the L-word. Let us begin.

1. You always have somebody to talk or bitch to about every stupid little thing. It’s almost like talking to yourself, especially when you’re bitching about girl drama, pondering over the latest fight on Gossip Girl (will Serena and Blaire work it out!?) or  complaining about how bad your stomach cramps hurt. Of course, you’re not really looking for much of a response and if they did respond in any way not suitable they may or may not get their balls chopped off.  Dude eventually learns to just nod his head and be as agreeable as possible. Being able to just vent without the hassle of somebody arguing or asking too many questions is a nice stress relief.

I love this one. I’ve always had trouble saying no to people, not because I feel bad but because I hate the awkward-ness of rejecting them. Marriage solves this problem. If I have some gross dude hitting on me? Flash him my ring. If I’m afraid somebody may like me and I really don’t want them to? I drop a couple “Oh..my husband….” bombs in the conversation. There is no uncomfortable rejection talks and no dude mourning the loss of his ego.  Marriage is very much like a Get out of jail free card. It’s as simple at this: I’m married. I signed a contract, and part of the contract was…I don’t have to deal with the likes of you anymore.

3. Two brains are better than one.

I’m the girl with the words. With the aspiring English degree. Who can make anything sound pretty and can make an A grade paper if you give me just a couple of hours.  I help the boy with anything he writes, with definitions and wording, and with speaking a bit more professionally. (and less…red-neck-ey?) But I barely passed geometry my senior year of highschool.  I’m a mess. I can’t keep track of anything. I’m very much a lose my head if it wasn’t attached kind of girl.  I constantly call my dude asking him where my keys or phone are, and he almost always knows even if he didn’t put them there. Husband is the math guy,  the bill payer, the organized one, my own human-planner. I’m the book smart and he’s the street smart. He keeps me in check, and I am his spell checker.

4. Having a good excuse.

I really shouldn’t admit this…..but I tend to use my husband as my excuse. That party that I don’t feel like going to that we were both invited to? Robby doesn’t feel like it tonight.  Out to eat to a place I really hate? Oh, well my boy isn’t feelin’ that place tonight, could we go somewhere else? I’m tired after work and don’t feel like going to happy hour? Oh,shit…my husband’s seducing me. (who wouldn’t understand that?!) Being married is a great reason to get out of something you don’t want to do. Although. He’s caught on and has started telling people, “Don’t listen to Christina when she tells you she couldn’t because of me….” So I may have to take this one off of my list soon. But it was great while it lasted. 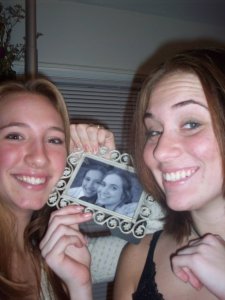 5. If you’re lucky enough, you marry your best friend. I’m lucky enough. I was telling Robby the other day how much I missed my best friend, Meg. (who lives in Maryland and will be here in LESS THAN A MONTH! EEEEEEK!!!) I told him how I have with her something I have with no one else.  That she understands me in a way that other people don’t, and that I can talk to her about anything and everything. I told him about our memories, how I prayed for her (everyday while I was walking my dog past her not yet sold house) to come into my life, how we spent every single day together for so many years.  How I usually get tired of people but if she lived here, we’d be absolutely inseperable. How I never question her intentions or motives for me because I know she would never want anything but the best. How we laugh about things that aren’t even funny. I told him I couldn’t explain it to him, but it was just something I had with no one else that I couldn’t even put into words. He replied to me with a soft chuckle ,”That’s called a best friend.” He and I both know that I throw the word “best friend” around quite a lot. I am blessed enough to have a lot of people that I am super close to and that mean the world to me; I wouldn’t want them to think any different. But when he said that,it kind of sunk in just how rare having a best friend is. It’s something on a whole different level, and I think some people go their life without having it or even realizing they’re missing it.  I’m lucky enough to have two. I have Meg and I have my husband. One I see once every year, and one I sleep with every single night.  One I have sex with and one I definitely do not have sex with. One lives in my house and the other,thousands of miles away. But they both complete me and I couldn’t imagine my life without either. They are both my kindred spirits, and that is something even more sacred than a best friend. They just…get me. I’m really not a hard person to understand until you get down to the itsy bitsy pieces, and they even get those. The itsy bitsy pieces. I’ve also slapped both in the face, if that says anything at all. I don’t really slap too many people in the face.

12 thoughts on “5 Good things about marriage that have absolutely nothing to do with love.”