These flowers are from my lovely husband.  I was especially surprised and happy to receive these because the night before I left the dude on the side of the highway.  Yes. You read right. I sped off, leaving him alone in downtown Austin. This is a first for me, leaving a husband on the side of the road to die. I should feel very bad, but I’m actually rather proud of myself. Is that bad? Okay,okay. Let me explain a little. We were in a little argument (in which I was yelling and he was getting annoyed) and he pulled over to the shoulder. Husband–he is actually a really dramatic little fellow. He’s walked home from Walmart before (a good hour and a half walk) through sprinklers and traffic, just to prove a point. I told him he wouldn’t walk home, and he did. Alright. Point proven. My turn. He get’s out of the car and says he’ll find a taxi.  So here I am pondering. He doesn’t think I’ll leave him. He thinks I’ll yell at him to get back in the car. I sit there for a moment,debating on being a kind and calm wife or going for my pig-headed-bitch side I really wanted to use. I decided on pig-headed-bitch side. I got in the drivers seat and sped off with an evil little smirk on my face. He eventually found a way home (thank-you to my dear friend,Tessa.) and I,being deathly afraid of the highway (For someone who is really not scared of anything,It’s a ridiculous fear. But I’d rather jump off a cliff into flames,probably.) was very proud of myself in making it home in one piece. Did I take the long way home? You betchya. Was my husband pissed? Indeed. Would I do it all over again? Hell yeah. & Did I still somehow manage to get the tie-dye  flowers I’ve been longing for brought to me the next night? Sure did. For some reason beyond my understanding, the dude loves me a whole bunch. This got me thinking. I think we all have little annoying things about us that people learn to overlook or love anyway. What are some other awful things about me? Well I made this list, for your viewing pleasure. Ahem.

Reasons you shouldn’t like me. (but probably do anyway.)

– I will usually find a way to get what I want. I have a few annoying tactics. They are the following: Pouting, Asking over and over again, Using puppy dog eyes, Sweet-talking,  and when all else fails, using a mixture of all four while repeatedly saying “Please? Please? Pleasseee? I love you. Please?” I used this last one on my boss the other day. I really shouldn’t admit to this because he definitely reads this and I’m sure I’ll never get my way again, but c’mon. I have to share the story, boss-man! It’s just you’re so damn cool. Alright, here goes. So it’s the day that I get back from my three day vacation. I just found out my best friend is coming on Sunday the 11th from Maryland. I also only want to work 15 hours the week she’s here, which is less than half of what I usually do. Mind you, there’s only four of us working at Starbucks, including Tony (boss-man.) and asking for this is really more like asking if he could chop a toe off and hand it to me or something. But it’s worth a shot. He tells me no when I ask. “Please?! I really need it off. Pleasseeee Tonyyyy I love youuuuuuuuu.” And no again when I ask 20 minutes later. And no all day as I consistently ask 50 times more throughout our coffee-making shift together.  So I leave him a note before I leave that may or may not have included the words “With a cherry on top.” near the end. I come in the next day and ask if I have that Sunday off, prepared for the worst. “Nope.” I pout and whine. He waits a minute before telling me “Damnit,Christina. You owe me so much. I got you that Sunday off AND you’re only working 15 hours that week.” I was a happy camper the rest of the day. My tactics,annoying as they may be, rarely fail me.

– I don’t completely dry off when I get out of the shower.

– I keep a razor in my purse at all times for when I miss a spot, which is often. You know when I’m really comfortable around you because I occasionally will shave in your car if I find a spot I really missed. 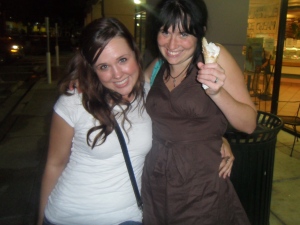 -I make you take pictures of every moment in life we share together. Every moment,damnit. We’re sitting at home watching a movie? Let’s document this. We’re going to get ice-cream together? Let’s get a picture. We’re in class waiting for the teacher to start talking? Alright,lemme turn the flash off. Kodak-moment time! I have a friend now who, everytime she sees my camera, yells at me and practically runs in the other direction.

– If I’m mad or I think you’re mad at me, confrontation is the last thing in the world that I want. I want to ignore you. I want you to leave me alone. I do not want to give you the satisfaction of knowing I care. I’m sure Dr. Phil would say that’s really unhealthy and not normal,especially for someone with a vagina. Venting is good. Releasing anger is good. Speaking your mind is good. Dr. Phil, kiss my ass.

-I drag people along to things they’d probably rather not go to.  I bring my friends pretty much everywhere with me (except shopping, I hate clothes-shopping with people. That’s me-time.), and even though I know they hate me for it, they oblige. Writing-clubs. The Social Security office. Two nights ago it was  poetry open mic night at a coffee shop, and I made sure one of my best friends and my husband came along. Tessa enjoys it but I think my husband would really rather be anywhere else. But he smiled and encouraged me as I got on the stage not once but twice that night. He knows how big I am on fear-facing and is really sweet about being there for me through whatever new fear it’s time for me to face. I think I’ve almost got this speaking in front of people fear down pat. The next fear I’ve made an appointment to face is donating blood. I pass out when even an eensy amount of blood is taken from my body so I’m thinking someone will definitely have to come along.

-I really hate driving and I’m really bad at it. I get lost easily and get major car anxiety if I’m driving somewhere I don’t know how to get to. I blame this on my dad (love you daddy!), who did the parent taught driver’s ed. He is not a very patient man and would usually end up yelling at me for a majority of the time, probably because I almost killed us everytime he took me driving up and down the road. I think he finally gave up and by the time my license came in the mail, I pretty much taught myself to drive. I can tell you from experience, the drivers (me) they have on the road these days are not fit for being behind the wheel at all. I didn’t know to yield on green when going left, I thought green always meant go. I didn’t really know the difference between the accelerate and reverse pedal either. This cost me a few oopsy-daisies. In the first month of driving I ran into the following, almost all while going in reverse: A fast food joint’s metal railing, a neighbor’s fence, my parent’s tree, and a curb. I’ve gotten a lot better but continue to change lanes too quickly, hate the highway, and scare anyone shitless who is ever forced to drive with me. It’s a work in progress.

– I buy things and then hoard them for months. I bought a cute new bikini the other day and my friend wanted to go swimming right after. I told her “But I don’t have a bikini with me.” She looked at me like I was crazy. “You just bought one.” I got an even crazier look when I responded with “Yeah, but I can’t use that. I keep things in their bags for a while.” “Why!?!?” “So I can look at it. I take it out, look at it…and then use it later.” She recounted this story to another friend a while later and they both thought it was hilarious.  This makes perfect sense to me. Apparently not so much to anyone else.

So,guys, in conclusion and such as <<(Does anybody remember that stupid Miss America chick?). Thanks for liking me even though I can’t drive, leave you on the side of the road,bring you to places you don’t want to go,shave in your car, and say drawn out ‘I love you’s’  just to get my way. Love youuuuu.

14 thoughts on “Reasons you shouldn’t like me (but probably/hopefully do anyway.)”