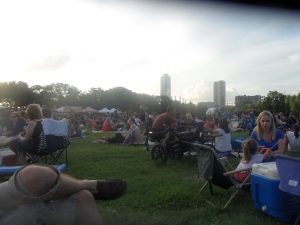 The past two days have been blissful. They’ve been full of dollar signs, bathing suits, fireworks, sushi, and friends.  Dude. Could there be a better combo?

I worked a full day of time and a half before heading out for the 4th. It makes quite the difference on my paycheck so I’m seeing happy little dollar signs in my head right now. After, it was time for the fun to begin. I have a deep love affair for downtown Austin. I was a sheltered kid growing up and though I’ve lived in surrounding areas all of my life, I haven’t seen much of downtown until these last few years. And now I can’t get enough of it. I’ve talked to a lot of people from the different states (and even countries) I’ve been to since I’ve turned 18. A lot of them seem to have this stereotype of Texas and Texas folk being narrow-minded,cow-tipping,Hell-Condemning Hillbillies. But you bring Austin into the mix? That’s a whole different scenario. If people ask me where I’m from I’ve learned to say “Austin.” instead of “Texas.”  The response differs from the following: “Oh, so you like own a farm and raise chickens and go to lots of rodeos and stuff?” to “Oh, Austin? I have a cousin/aunt/friend who lives there. I hear it’s a really cool/music-oriented/diverse/fun place to live.” Austin stands apart from the rest of Texas. I mean, have you heard our quote? “Keep Austin Weird.” And it is. So weird. I love it. We are an open-minded, crazy grab-bag of people.  We make Texas so much more bad-ass. 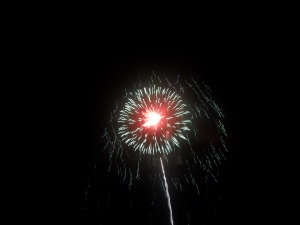 I am pretty proud to have been born and raised in this area. I became even more proud last night after going to Zilker Park to watch the 4th of July firework show. Can you believe after 21 years I’ve never been? My family usually gets together to shoot off fireworks and do the hands-on kind of stuff. This is the first time I’ve been solely an observer for the show, and I loved every minute of it.  This was a a huge event. Over 100,000 people(especially. A live orchestra.Food stands (Chicken fried bacon and shit.) Blankets and fold-up chairs and happy people all around me. It’s been raining nonstop from a pesky hurricane but it miraculously disappeared for the night. The weather even knows not to mess with Texas (especially 100,000 of us gathered together.)  As I walked around I people-watched and noticed so many different sorts of groups and faces. A couple of teenagers, way too white for their own good, dancing to Lady Gaga. An old woman waving her arms around in the air, free as can be. An adorable Asian family playing a game of cards and excitedly throwing their deck down all at the same time. Little kids running up to give their mom a big kiss on the cheek. All of us, together to watch the same show. The huge “Hurrah” sound we all made when they started was fabulous. I almost cried when we all stood up for the National Anthem. It was beautiful—the togetherness of it all was something I hadn’t felt in a while. Made me very proud of my country. Made me even more proud of my fellow human-being in general.  I tried my best to get pictures while snooping on the crowd but as I tried to be inconspicuous my lovely friend Jennifer yells “Why do you always take pictures of people you don’t know?” Wow. I don’t seem creepy to the people I am now obviously taking pictures of at all. I did however manage to get a nice collection of my lovely night:

I snapped one picture of an adorable little boy before Jennifer yelled what I was doing to the whole world. Remind me if I decide to be a detective that this girl can’t be my faithful sidekick.

Soon after, I get grease on my pretty shirt from Jenn’s stupid turkey leg. 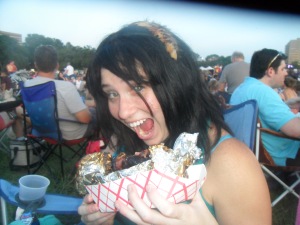 So I murder her stupid turkey leg.

She helped murder said stupid turkey leg. I kind of forgive her for ruining my stalking of random people.

And we are both very happy.

I am in awe of these fireworks, man. Big pretty light things. I taped a video where I sound like this :”Oooh. Woww. Ahhhh. Oh my goodness! Wowwwww.”  I am five years old at heart.  My husband cracked up laughing so I decided to save myself from the embarassment and not show it to too many people. Oh,what the hell….

You can stop mocking me now. OKAY. That’s really enough,damnit!

After all of this turkey-murder and shiny bright lights…It was time for some downtown action. 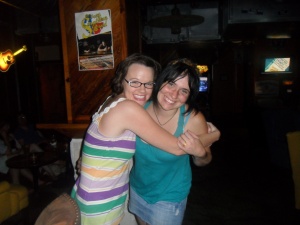 Our boys refused to take a good picture for us so we finally pretty much gave up. Some nice drunk fellow walked up to us while the boys had momentarily walked away and offered to take pictures of us. Our intoxicated angel! He was quite nice and even attempted to hug me before walking off.  I gave him an awkward pat on the back in return.

We had a great night. Bunny (Jenn’s husband, his real name’s Josh. We call him Bunny. I don’t know why. Oddly enough, it fits.) bought us a round of shots, the live music was a’ight and the queso was amazing. I felt even more proud of my city after a conversation started when I complimented a random girl on her dress. We got to talking and she told me she was from L.A. and her friends were also all from different parts of the country. They all decided to meet up in Austin for a weekend get together. I was excited to be one of the Austinites to give her ideas on where to go.  I smiled when I saw her walk back to her group of friends. It was like Sex and The City 2 but younger, and instead of a foreign country…. in Texas!

After the crazy night that was the 4th of July, I got the chance to sleep in late and cuddle with my boy. We work different schedules so this rarely happens. He made me french toast and we watched trashy daytime tv for a while before parting ways. Later,my best dude friend called me to be his shopping buddy and I was more than happy to oblige. We shopped for a while and when neither of us could find anything we wanted we settled on a sushi place in the middle of the food court. Oh. My. Goodness. Fried Jalapeno Sushi Rolls? My mouth is dripping thinking about it. 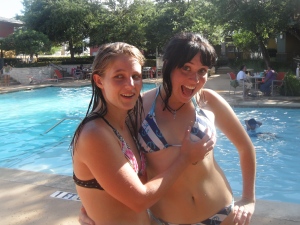 I ended the day by tanning and swimming with another close friend. And, as you can see, getting my boobies touched. Don’t worry, she made sure to cook me a spaghetti dinner after. I don’t just give that shit up for free! Hee.

Not much beats the joys of summer, Ya-know-wha-I-mean?