I’ve been a busy girl this week. I’m trying to cram in as much as possible before starting at my new university next week.  I’m going to be hella busy. Between work,school, and my new mentoring commitment…I’ll be booked. I love it. I’m excited. And nervous. And ready.   I think those three words describe a lot going on in my life right now. I’m starting a new chapter in my life.  I’m changing a little. I’m doing more for myself and more for others than I ever have. Luckily, I still have all the cool people from previous chapters to drag along to this new one as well. If my life was turned into a book, it’d probably be a pretty sappy/cheesy one right now. You know. One of those “Girl finds herself while also finding love and happiness and shit” kind of books. I don’t even like sappy/cheesy books so I doubt I’d read it . But living it is pretty fun.

If my life was turned into a corny coming-of-age novel, this is what it’d look like: 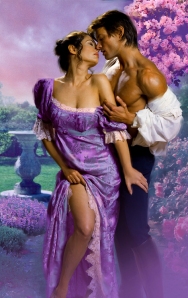 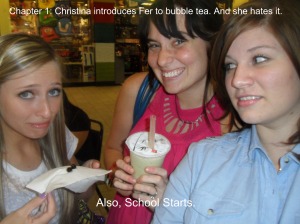 -Christina starts a new school. My classes are all ready and perfect. Orientation is on Saturday. I’m not going to community college anymore. It’s weird. I never really had it in my heart to even attend a four year until about a year ago. I had a nice job lined out for me if I just earned my associates, and being the first girl in my family to ever attend school at all, I thought this would be sufficient. Something kicked in me though. I need a degree. I can physically feel how much I want a degree and the whole real college experience (Though since I’m married it won’t be too crazy.) I’ve finally decided on my major, and I’m pretty certain it’s sticking. I’m going to go with a multi-degree in English and Behavioral science. I can’t decide between the two so I’m going with both. English is what I’m good at and Behavioral Science–anything about what makes people tick–absolutely fascinates me to no end. Maybe a weird mix of majors? Maybe I could be a novel-writing-social-worker.Eh?! 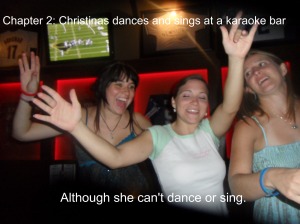 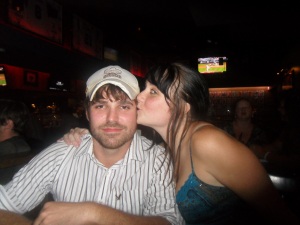 -Christina and karaoke=Bad. Monday was my friend’s birthday. Sadly, I missed a good majority of the Trudy’s shindig, so a couple of us went to karaoke afterwards. Kimber and I sang some good ‘ole Taylor Swift, Alyssa rocked it to some old school stuff, and Robby even ended up singing his own version of ‘Total Eclipse of the heart.’ (His own version= adding curse words and actually speaking ‘Musical Break 15 measures’ when it came on the screen.) Despite the fact that I think I killed a few eardrums, it was awesome. I love dancing and singing in public. It almost makes it more fun that I’ m awful at both. 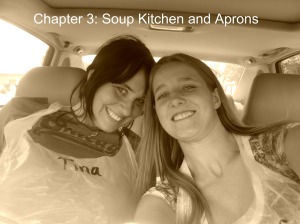 -Christina goes soup kitchen. I called up a place called Angel Food Ministries last week and volunteered to have my first soup kitchen experience. I brought one of my best friends (Husband said I’m too naive to go alone) and we were both pretty giddy and excited to go help out. It was a little bit of an adventure getting there. A little building located in a bad part of Austin, this place was kind of hard to find. We ended up in the wrong parking lot once and a homeless man started banging on my car door. Kimber is at this point freaking out and I am completely trying to ignore the fact that someone could possibly be trying to break into my vehicle and rob me for all I’m worth (which isn’t much, but still.) We call up the place and eventually get to what we think might be the right one. It’s another shady-looking building and when I roll down my window and cautiously ask if this is the soup kitchen, a guy laughs at me (He laughs at me!) and says to come on in. Kimber and I are both looking at each other, not knowing whether this is really the soup kitchen. (To further the creepiness, this building is located down a really creepy ally) There are two guys outside waving us in and as I step out of my car I am about to have a heart-attack. Dear God, I am trying to help out here. Please let these guys be real soup kitchen helpers and not crazy-murder rapists.  My prayer was answered! We walked inside, relieved to find an actual soup kitchen and not chainsaws and axes. The whole experience was amazing. We started out prepping food and silverware, and once lunch-time began Kimber and I traded out ticket-taking. Ticket-taking is the most social part of the soup kitchen, as you are at the front while everyone else prepares the food in an assembly line fashion. It was kind of heart-breaking to see how distraught some of these people were. We can only give out so much, and I was given strict rules on only giving out one cup/tray per person. It was ridiculously hard for me to tell a couple of people ‘No’, when really I wished everything was an endless buffet. There were a few that got frustrated or slightly obnoxious, but as many were leaving they would give a big smile and say “God bless you.” or “Y’all are doing a great thing here.” or just “Thank-you, Have a great day.” One guy kept coming up to tell me jokes. He almost got me once! He asked “What do you do at a red light?” I say “Stop.” He then made me spell “Tops” three times, faster with each turn. Finally he asked me  “What do you do at a green light?” My instinct was to say “Stop” but I thought about this for a second and stuttered “St–GO!” He smiled and gave me a head nod of approval before walking off. My heart was completely full by the end of the three hours I was there. Miss Kimber and I agreed that although it was at first scary and then later a little disheartening,the experience and helping out was all more than worth it. We can’t wait to go back. Next time, we’ll make sure to park in the right parking lot. 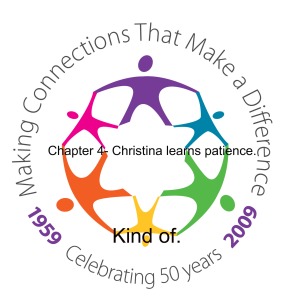 For someone with absolutely no patience, thisBig Brother Big Sister process has been painful for me. I actually started stomping my feet up and down like a five year old the other day and pouted “I. Want. My. Little.”  to my husband. He laughed at me. I finally got matched with my fourteen year old Little a couple of weeks ago. Then they couldn’t get hold of the family. They waited a week and finally got in touch with the mom, who had changed her number. A counselor called me to tell me “We got a hold of your Little’s mom and they can’t wait to meet you…” I heard the hesitance in her voice but went ahead with my enthusiasm. “Great!!”  To which she responds “Well. (chuckle goes here) Turns out they’re moving. Down to South Austin.” Now both my future little and myself have moved, making the once 15 minute drive into an almost 40 minute drive. Lady on the phone told me she understood if I couldn’t do it anymore. I  momentarily considered bowing out gracefully and waiting for a closer Little when I got a little pull on my heart. Call it my conscience or my impatience but I rarely get pulls on my hearts or feelings about anything, and I knew that meant I better listen. I told her that it wasn’t a problem. And really, it’s not.  The scary part is that I have to drive on the highway a lot. But you know? That’ll be good for me. I think this whole thing will be just as good for me as for anyone else. Starting next week I’ll have one day free every week. Sunday was going to be my ‘Spend  whole day with the hubby’ day but I figure he can share. I see the dude enough anyway. I should be meeting her in the next week or two. EEEEEEK! I’m excited, if you can’t tell. Ps:I still think patience is the worst virtue. 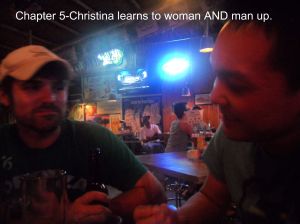 -Christina takes on cooking and ….shot-taking? I dunno what has gotten into me, but I’ve become a chick who likes, dare I say loves, to cook. I find myself daydreaming about what I’m going to cook for my husband during the day. I always thought the culinary gene had just skipped me–my whole family loves either cooking or baking and I’ve always despised it. I think it just took a little bit longer to find me? It’s one of my favorite hobbies now. A couple days ago I even strayed from my normal recipe website and ventured out on my own. I made my own recipe–an egg-olive-oil-spinach-parmesan-cheese-ham-salami-greek-vinagariette-pasta-salad. It was pretty bad ass. My husband ate his whole heaping portion and I have been munching on leftovers. Being a wife is kind of fun, I suppose. I’ve also signed up for something I may regret come next week. After work last night, I went out with the husband and a couple of our friends. Mister Bing had the lovely idea of a future drinking contest and I kind of maybe told him I could totally kick his ass.  Robby and Deesh both think I’ll get my ass kicked, but Robby said he’ll train me (Husband has a boot-camp for this kind of thing.) and Deesh told me he’ll make all sorts of girly shots if I promise to actually drink and not just sip on them.  I suppose I can attempt this. I also got quizzed on my knowledge of perverted slang terms last night. Conversation went like this at one point:

Deesh: Do you know what tossing a salad means?

Me: (matter of factly) Yes!

The boys: What is it?

Me: Where you,you know….get a salad…and make it?

Do you know what tossing a salad is!?  Gross. I’m editing that part out of my new chapter.