Happy Labor Day! Thus far, it’s been quite a lovely and low-stress weekend. I’ve always had to work on Labor Day weekend (does anybody else see the irony in that?!) but because my availability changed for school purposes, I’ve been able to relax and enjoy. Thought I’d share my weekend this far with all of you lovely people.

Unfortunately, I did work Saturday night. It wasn’t so bad with the help of my dudes. I work in Starbucks but because it is in a Target, I’m connected with the deli. The deli boys are great. They’re my comic relief when I’m working alone (which is always now) and they’re a lot of help to me. I was pretty backed up Saturday night and they,without ever complaining, helped me load dishes, fill up buckets of ice, and pick up really heavy mats. (I need some muscles, yo.) They give me fresh from the oven cookies and even defend me to bitchy Russian ladies. Hee. This was my favorite story of the night. I closed three minutes early (A whopping three minutes!) because I was pretty far behind. I was in the back washing the final dishes and getting ready to leave when David rushes back to where I am and asks me “What time do you close?” I told him nine and he nodded his head and went back to the front. I already figured there was a difficult customer up front. I was right. He came back and told me I had a bitch for a customer and I had better go out there. The first thing the lady with the thick accent tells me,while pointing to her watch, is “It’s Eight-Vivty Seven,Ma’am.” I meekly nod (I mean, she is right. Dangit.) and make her her grande-cappucino-in-a-venti-cup-with-extra-whip-the-good-kind-of-whip-that-goes-swooshswooshswoosh (Whatever the hell that means.) The next thing she tells me is “That boy…he was VERY rude….he yelled at me!” I know that David wouldn’t ever yell at customers but I apologized and she informed me that it wasn’t my fault. I guess we’re playing good cop-bad cop here because truth is I would have really liked to smack her across the head. After I make her the drink with the whip cream that goes swooshswooshswoosh (put Russian lady’s hands flailing in the air illustrating lots of swooshing whip cream here.) I quickly hear the story of what actually happened. The lady, who was either naturally loud or naturally a bitch (or both?) ,came up to the counter yelling for someone to help her. I was in the back and couldn’t hear a word over our massive dishwasher. David told her we were closed and this is when she started with the “Vut it’s eight vifty-seven!!!” thing. I think he was just completely irritated with her tone of voice and they went back and forth for about a minute. Finally she demanded to speak to me and he, in a very even tone of voice, responded with “Why? So you can yell at her?” After she promised not to yell at me, this is when he finally went and got me. Ha. So That’s why she was so pissed. Made me all warm and fuzzy. My deli boys. They have my back. 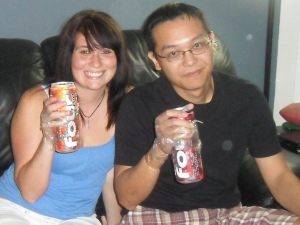 The rest of the weekend was spent with the friends. Both Saturday and Sunday night we were at Deesh and Bing’s place, and both nights were memorable. T 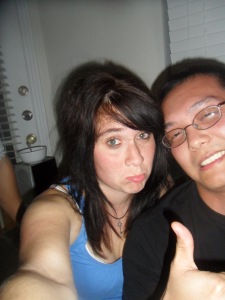 he first night was Bing and I’s planned drinking contest. I kind of knew I might lose but I thought it would be fun to try anyway. I try anything once, you know. I’ve never done a drinking contest before. So here goes. I failed miserably. Deesh gave us Four Lokos (One huge drink. The equivalent to liquid cocaine, I later found out.) and husband had the brilliant idea of taping these drinks to our hands. Worst idea ever. By the end of this drink, my hand was numb and frozen and I was feeling sick and way too intoxicated. I had to forfeit. In my defense, these huge things are equal to three beers AND I had one drink before. Deesh tried to serve me a shot of jager after and this was the end of my reign. I about barfed just looking at the shot. So Bing won. It was worth it. I’ve never seen him quite so drunk and he passed out way earlier than me. Though we shared a bean-bag at one point and we both about passed out. Dude. That Four Loko stuff. It’ll get ya.

Bing and I apparently inspired a series of contests after my drinking fail. Push-up contests and Arm wrestling contests were abundant. It was a fun night. Though I lost at every contest I attempted. You can see my sad pouty face in the picture. I lose a lot. Boo.

The next day husband and I lounged around and I ran through our  sprinklers like a five year old. No, really, I did. I think I was embarrassing husband, but it was worth it. Afterwards I sat outside reading and doing homework and husband removed a dead tree and dug a big hole in our yard. We still have a big hole in our yard, and it’s pretty fun to climb into. It’s possible I have the mental capacity of a second grader.

We ended the night back at Bing’s and the gang. This time I brought my lovely friend Katie and we both ate our first dove! Not the chocolate, the actual bird. It was surprisingly delicious. After, I convinced most of the group to play Apples to Apples. One of the dudes decided to ad-lib and make up his own perverted topics instead of ever picking up a green card. Turned out to be pretty hilarious so we all played X-rated Apples to Apples for the rest of the night. I still lost miserably, if you’re wondering. Losing can be pretty fun though.

In conclusion,I hope y’all had a wonderful Labor Day! I also hope all of you stayed away from Four Loko. I definitely hope none of you were convinced into taping it to your hand. (Somehow, I think you’re all smarter than that…Not to insult myself or anything.)  I leave you with video fun of my weekend. Enjoy! Love,Tina.

5 thoughts on “Russian Ladies and Losing in Style.”