I love notes. I’ve always loved notes. I know I still have a couple saved up from highschool somewhere (which is amazing because I was homeschooled the majority of my highschool years.) ,a couple from girlfriends,and a really sweet one from my best dude friend two summers ago. I wish they were still popular after highschool. I personally love doing the hand-written thing. Whenever I am really trying to get something through to somebody, especially something sentimental that saying in person or over a text just wouldn’t be the same, I write it in a note. There’s something about taking the time to pour out your thoughts on a piece of paper that just really gets to me. Maybe it’s my obsession with writing in general or maybe it’s that it means slowing down and thinking through your thoughts. Maybe it’s that it means you’re actually taking the time to think about someone else and what they really mean to you. Whatever it is, I love them and wish they weren’t starting to become so outdated. So I thought I’d take a little time to share with y’all a few of my favorite ‘notes’, as of lately.

This was our first assignment to read in my Modern Fiction Class. Lately, I’ve only read for leisure and therefore only pick out books in my comfort zone. I mean to venture out,but can’t bring myself to take home a book I’m not sure about (unless it’s free.) I’m so glad I was forced into reading this book, though at first I thought I wouldn’t be able to keep my eyes open. Less than halfway through, I could hardly put the book down. Basically, it’s about an isolated,crazy dude living in Russia. It’s told through that crazy dude’s narration and is basically a book about him embarrassing himself with a ton of political subtleties thrown into the mix. There’s an attack of Communism and Nihilism going on throughout, but that’s super easy to miss when you’re noting how off the wall this dude is. Still, in all his absurdity, I found myself underlining line after line, and relating more than I have to a book in a long while. Maybe we’re all crazy, or maybe that just says something about me personally, I’m not really sure. Still. Wanted to share some of my favorite quotes from the ‘Underground Man.’

“It is in despair that the most burning pleasures occur.”

“Then,finally,there are such as a man is afraid to reveal even to himself,and every decent man will have accumulated quite a few things of this sort.”

“And if there was love once, if they married out of love, why should love pass? Can’t it be sustained? It rarely happens that it can’t be. Well, and if the husband proves to be a kind and honest man,how can love pass? The first married love will pass, true, but then an even better love will come. “

My absolute favorite–“Some women,the more they love,the more they pick quarrels with their husbands. It’s true, I knew such a woman. “You see” she all but said, ‘I love you very much, and you ought to feel it.’ Do you know that one can deliberately torment a person out of love? Women,mainly.”

There’s actually quite a few more, but I’m going to move on now. If you haven’t,read this one for yourself. You might be surprised! 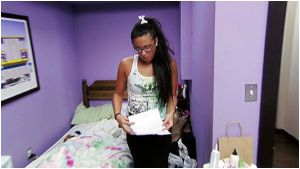 Yes. I’m moving on from an intellectual and acclaimed novel to trashy reality t.v. show. What of it!? Let me give you a little background info in case you don’t watch the only show I really ever do–Jersey Shore. So a bunch of kids from New Jersey and surrounding areas are living in a big house in Miami. (this is the second season, first they were in New Jersey. Thus,Jersey Shore) Ronnie and Sammi break up. Ronnie hits on other girls at clubs (Which honestly, give the dude a break. If you’re not actually together, it’s not cheating. I hate when chicks pull that card.) A couple of the girls in the house know about it and are too chicken to just tell the girl. They write her a note and hide it in her dresser. Drama ensues. What I’m pointing out here is something resulting from the note that I noticed. These people, when angry with eachother, love to insult. They also love to insult with things that just aren’t true. “You’re fat!” and “You’re an ugly beast!” are two of the most recent ones that make me go “Whaaa?!” Because JWOWW (though I find her boobs distracting and her personality extremely obnoxious) is not an ugly beast and Angelina (though an annoying two-timer and maybe a little curvy) is not obese. Then I started thinking about all of the insults I’ve both given and received in my life. For the most part , all of these insults were low blows and something meant to hurt, not to necessarily be accurate. We, most all of us, go for what we hope will sting the most. Often times we don’t know the person we’re insulting well enough to know what will sting the most, so we go for the generic-this-is-always-hurtful-to-tell-someone stuff instead. How often do you actually hear an intelligent and well thought through insult!?  So. Jersey Shore has taught me something. Insult better! Just kidding. It’s taught (or actually just reaffirmed) me that,at heart, we’re all five year olds responding with “You’re stupid!” after getting our toy taken away. Except we can’t tell our mommies and daddies anymore.

Dude and I got in a fight the other night. We were downtown and he and one other dude got lost. They thought it wa funny and didn’t really care to be found. The rest of us waited for what seemed like hours for them to return, after all the bars were already closed down. The other boy had an excuse as it was his 21st. Robby had no excuse and I wanted to kill him. I think my problem is that husband rarely gets drunk anymore. When he gets like this it reminds me of the immature dude I used to know when we were first dating. Both of us have really grown up together and both of us do occasionally regress. This was a night of regression for both of us, as I went back to a bitch-mode Robby hadn’t seen in a long while. Ha. Of course, it really wasn’t a huge deal and we both got over it the next morning. Actually, I still had a little bit of a grudge until I opened the computer the next morning to see—A NOTE! Robby’s written me less than a handful of notes, and the notes he has written have usually been on a special occasion. This was a first for him, as it was TWO pages long. He was still pretty intoxicated when he wrote it so it was mostly rambling on about the Delorean he saw while lost. ( Back to the Future is my boy’s obsession) Still, he took the time and effort to do something he absolutely despises more than probably anything, and this is the art of writing notes. It was also all extremely sincere and in Robby-fashion…I could practically hear his voice speaking to me through the note. Made me a happy girl that he actually did something for me that he hates so much. This note would be the equivalent of me watching every single Star Wars movie back to back for him. Shudder. Thought I’d share my favorite bits (I had to cover other parts with paper because 80 percent of his note was pretty innapropriate.)

” I couldn’t live without the love of my life, my beautiful and sexy hot ass wife.” So poetic, he is. Hee.

“Christina, I love you so much no matter what.”

Oh, and if you can’t tell the top of the note says To:Judas, From:Robby. It’s a long and kind of funny story. We’ll save that one for later.

9 thoughts on “Notes (From Underground,Husband, and Snookie.)”