We’re back! Vegas was absolutely amazing. I don’t even know where to begin so I’ll just jump right into it. Some highlights/anti-highlights/tips:

By the end of the first night, husband and I had been awake for almost 24 hours. We left our house at 3:45 am going on two 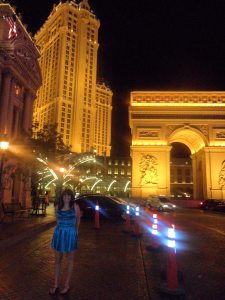 hours of sleep, and arrived in Vegas right around 9. We decided to stay up ALL day, even though we were both jet-lagged and grumpy. Vegas isn’t supposed to sleep. So we didn’t. We were about ready to rip each others eyeballs out by the end of the night, but it was worth it. I didn’t want to miss anything, and I didn’t. The first day we spent walking up and  down the strip and in and out of hotels, as I gawked and kept my eyes and mouth wide open. I’m easily amazed and amused, so you can probably imagine that Vegas was like a candy store on crack for me. At one point I wandered off alone outside of our hotel, the Flamingo. Our hotel was apparently the hot-spot for on the spot weddings, because I swear to you, I saw at least 50 couples on that first day decked out in dresses and rented suits (The realist in me guesses that maybe three of these couples will last. I mean, at least half had to be drunk or at least totally

spontaneous. Right!? But I do wish them the best. ) Upon walking outside, I found a pretty scenery, a list of about 100 weddings that were happening at that hotel that day, and an Elvis clad groom. There are a lot of Elvis’s in Vegas

. I got a picture with one of them. I felt like I was in the movies. Elvis. Casinos. On the spot marriages. Hotels named after birds. So much like the movies! But it was real! Vegas is definitely one of those you have to see to believe kind of things.

That first night we went to a buffet where they had rows of cotton candy and mini fancy cheesecakes and any other dessert my heart could possibly desire. I have been eating pretty good and exercising at least 5 days a week as of lately. I decided to let myself eat whatever I wanted and not work out even once the 3 nights and 4 days we were in Vegas. Man. I was in food heaven. Husband and I decided Vegas buffets trump all other buffets we’ve ever been to.  Did I mention…cotton candy!? Tip set #1 in Vegas- Go to a fancy buffet. See a Vegas wedding. Walk the strip up and down. Get a picture with Elvis. And other celebrity imposters. Such as Star Wars dude’s and Giant M&M’s.

Day 2.- Well. This was an interesting day to say the least. We started off with some foot-long margaritas which were AMAZING. And potent. With two extra shots put in, I was feeling a little crazy after just a few sips.  We spent the day perusing the strip, eating at cute little places, sipping on our huge margaritas, gambling, and taking lots of pictures. Walking down the strip, you’ll notice a lot of guys trying to sell you packages and shows. Did you know you have to be 25 or be with a 25 year old to even talk about these  “deals” ? Just when I thought I was old enough to  be considered a big kid.

I have another four years! Psh. I showed them. A few dudes tried to give us “Deals” to see Vegas shows, but I was having none of that.  My husband was told, for th

e second time (this also happened on our honeymoon) by some random sales-dude “She’s a firecracker.” Or maybe the first time it was that I was feisty. I don’t think it’s necessarily meant as a compliment, but I take it as one. I get a little sassy when people try to rip me off. I may be naive, but I wasn’t born yesterday.  Though I kind of acted like it after my tragedy. Sigh. I lost my camera somewhere between the sketchy sales-people and taking a picture with Batman. Well, I noticed it was gone before I got my picture with

batman. Dammit. I was pretty upset, to say the least. My camera is.. was..my baby. My baby is now probably being sold by a pick-pocketer  or maybe even one of the hooker card givers and it makes me a little teary-eyed to think about. But the show must go on. Especially in Vegas.

Still, I did need a little time to pout. I spent a couple of hours in the hotel room being a big baby. I sulked and husband,bless him, went to go buy us a pizza to bring up to the hotel room. He was taking a while and I decided to go find him and, well, peruse. I like perusing.I definitely probably don’t recommend being a girl perusing Vegas alone. Though I don’t heed my own advice. I like to wander. While wandering, I found a 60-ish year old man with a creepy smile in the elevator. He complimented me and my outfit by eyeing me up and down and saying “Wow. You’re going to drive everyone crazy in that 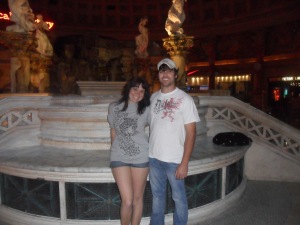 little thing.” Shudder.I haven’t learned the skill of being rude to all the many perverts in this world quite yet. It’s a work in progress. So I just laughed and said “Thank-you?” with a definite nervous tone in my voice. Luckily, husband was right there when the elevator opened and dude was still eyeing me creepily. I quickly walked up to my dude and gave my new friend a smile. He bashfully smiled in return. Take that,old man. Tip set #2 for Vegas: Be wary of creepers in the elevator. Drink a foot long (or two or three) margaritas. But don’t lose your camera because of it . Gamble. But don’t lose all of your money because of it. (We didn’t, if you’re curious.)Be a “firecracker” if you have to. Oh! And ask strangers to take pictures of you if you need to. They’re cooperative and almost always very sweet. I know this because I asked approximately 239032489032 strangers to take pictures of the husband and I, much to husband’s great dismay.

Day 3: This was possibly my favorite day in Vegas. Originally, we were supposed to make our way to California, but husband 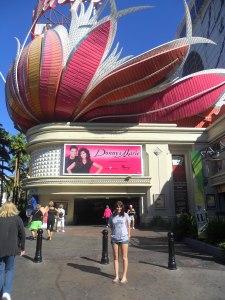 cracked me a deal because he really didn’t want to go to California. His idea was that we would waste our time driving and spending a couple hours in another state, or we could stay in the same state and have fun all day long. He promised we’d head out early and buy me a brand new camera

(with the money he won off a Star Wars slot machine) if we didn’t have to go out of state. I pondered on this for a long time and realized the only reason I really wanted to go to California was to say that I went. It’s been on my goal list forever and I’m maybe a little too goal oriented. When I finished pondering I finally came to the conclusion that husband was actually right this time. When I do go, I’d prefer to go with a camera, time,and somebody else who actually wants to go. So. I kindly let him buy me a new camera. I’m so sweet. Ha. I didn’t get all of the pictures back but I did get a good majority. By the end of day three I was super thankful that we decided to enjoy our stay in Vegas and not be crammed for time rushing somewhere else. As stubborn as I am, it sometimes surprises me how often other people are right. We played more slots, refilled our footlong margaritas (twice), enjoyed all the pretty hotels and scenery some more, ate at a fancy Italian restaurant with raw calamari and bacon,and saw a pretty cool show. We couldn’t decide between comedy or acrobats, so we went for a little of both with V(the Variety show) It was pretty amazing. People flying through the air, dude playing Beethoven on the piano with ping-pong balls, comedians featured on Jay Leno and David Letterman, dude hanging from the wall playing the drums (also located on the wall)…..Husband and I alternated between laughing our asses off and gasping in amazement the whole time.

My dude is a fun partner in crime to take along to places. I couldn’t ask for a better one.  We have fun and accumulate inside jokes and games wherever we go, and Vegas was no exception. My favorite game we played this time involved the men handing out the hooker cards. We’d see who could out-do the other with our comments on why we couldn’t take their hooker cards. For example, as one guy would pass us a card with a naked chick on it, I’d tell him “He’s married.” The next time Robby would tell them “She likes men.” I noticed after a while that the “He’s married” wasn’t working so much so I tried another approach. I made one dude bust out into laughter when, after he passed us the card, I told him “He’s gay.” Robby was pretty embarrassed but admitted that it was pretty funny and I did make the porn dude laugh. He promised to get me back though. And he did. Another salesperson 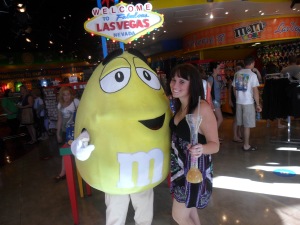 attempted getting our attention on the way back to our hotel and husband told the dude “We can’t talk right now, she just crapped her pants.” I think he went a little too far there, but after the humiliation had passed, I couldn’t help but giggle and hand him the victory. We’re always like this. We embarrass each other, and play off of one another. We share secrets and stories and vacations. We’re constantly laughing. We fight and make-up five minutes later. We get tipsy and walk the strip hand and hand. He’s my best friend, this guy. We have a blast together and could be sitting in a cardboard box and still have a blast together. A trip to Vegas after a wonderful one year of marriage just makes it that much more great. 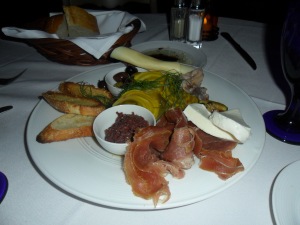 Tip set # 3 for Vegas-Buy a new camera if you have to. A camera is a must. Go to all of the hotels, but especially go to the Bellagio. It’s beautiful and they change their scenery by the season. Right now it’s a giant man-made forest but Husband said it wasn’t like that last time. Also go to Caesar’s palace and the Venetian, they’re both beautiful and the Venetian has pretend clouds on the wall that change colors depending on the time of day you go. Definitely go see a show, and I guess right now I’m a little partial to the V show, ‘cuz that’s the one I saw. Get all dressed up in a really shiny dress (If you’re a girl. Though in Vegas, hell. Do it if you’re a guy too.) Eat a fancy dinner, but make sure you know how to eat the raw meat. Actually, If you don’t, that’s okay. It’s kind of fun eating new food with a big question mark across your face; even if the wait staff is probably giving you and your partner in crime crazy looks as a huge strip of raw meat hangs from your mouth. Even if you don’t do any of this, just go to Vegas and definitely bring somebody who you know you’ll have fun with. Best friend husband’s are an especially lovely combination. But then, I’m kind of partial. 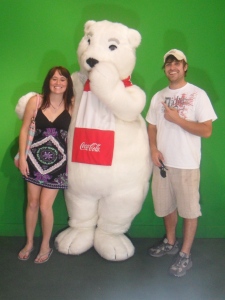 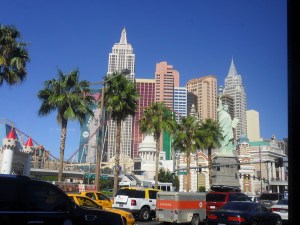 14 thoughts on “Notes/Tips on Vegas Vacation”