People are seriously so damn cool. And interesting. And weird. And funny. And they definitely never fail to surprise me. This past week my mind feels like a journal that is just constantly taking notes on people. Today as I signed up for next semester classes, I also changed my major. To behavioral science. I want to learn everything about everybody. I want to personally know the world.  I want to meet everyone. This will never happen, obviously. Sadly. But I’m listening to acoustic music and drinking wine right now. I’m in dreamy mood. And I would like to share some of my recent

people observation notes. Ps: I am a constant people watcher/analyzer. If you don’t constantly watch/analyze people like a crazy creeper, you should start.

I always think I know everything about him, but then I’ll learn a little piece of something else that makes me like the dude just a little bit more. I’ve learned in the past few months that he is perhaps the most passionate and determined person I’ve ever met. When he wants to be. And only when he wants to be. Occasionally, there are days where he wants to do nothing but watch Star Wars marathons and drink beer. I give him that occasionally. He is a guy. But come every Friday, even when I grumble now and then, he insists on going to bowling league. I’ve never seen my dude be so persistent about anything. One day when I was just really worn out from work and school and did not want to go, he urged me, “C’mon baby. I’ve finally found something I really like to do.”  Well. Wouldn’t I be an awful wife if I refused?! And then there are other days, the recent ones, where he gets a broken hot-tub delivered free of charge to our house…And takes up weeks and weeks and weeks doing nothing but attempting to fix said broken hot-tub. And he does. He fixes it. We now have a hot-tub that gets sizzling hot and costs next to nothing ($80 for a couple of parts) in our garage. We use it basically every night and it’s heaven in this colder weather. Though I do want to move it into our backyard. I’m starting to feel a little too redneck with a hot-tub in our garage…..

On Girls vs Boys: 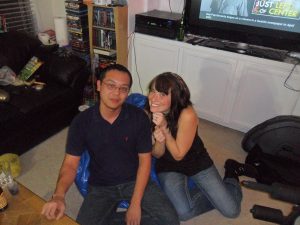 Husband and I went to our friend’s apartment after bowling league on Friday. It’s three dudes living together and they had invited another guy friend over as well. I brought a chick friend as not to be totally outnumbered by penises. When we got there, they were already playing drinking games. A bottle of whiskey was out and a card game called “Bang” was in action. (Funny ‘cuz dude who owns the game’s name is ‘Bing.’ Bing. Bang. Hee.) The game was extremely confusing to me the first round. It’s not your average card game. Basically, it’s a battle of wits. You’re either a sheriff, a deputy, an outlaw, or a renegade. The sheriff is the only card visible to everyone else; everyone else has hidden positions that are usually discovered by whether you hurt or protect the sheriff.  Obviously, deputies protect the sheriff and the outlaws try to kill him. The renegade does his own thing. I know. It’s confusing. The first game I got killed right off the bat. The second game I lived only because I was the sheriff and Deesh and Zach did a good job of protecting me. By the end of game two everyone assumed I was clueless. But I had been taking some mental notes. I drew the outlaw card on the third game and decided I would do my best to take the sheriff down. I’m pretty good at playing myself dumb and everyone pretty much believed I was the deputy when I told Bing, the sheriff, “Biiiiiing. I just want to make sure you’re safe. ‘Cuz that’s my job.” I kept acting my naive role and eventually everyone believed me except Crystal, a deputy in the game. Dammit. We are pretty new friends but girls have a sixth sense about other chicks, I’ve learned. On top of that, Crystal has two classes with me and knows it doesn’t take me that long to catch on. She also has, in the past few months, made very clear to me her hatred of stupidity. She even told me after the game that she knew I was faking it because we probably wouldn’t be friends if I was actually that dumb. Ha. So I started getting suspicious eyes from her throughout the game and eventually she started asking Bing “Are you SURE she’s good!?” He and everyone else was convinced I was either good or harmless and therefore didn’t bother killing me off. I also had a boy on the opposite team, who was convinced I was a deputy, telling me every move to make when I was stumped. Every-time I wouldn’t play the right card in order to defend ‘my’ sheriff, I simply blamed it on my not knowing how to play the game. Silly boys. It totally worked. I ended up killing the

sheriff on the last move, totally shocking every dude who was absolutely certain I was simply a very unhelpful deputy. Deesh, who was my fellow outlaw, dropped his jaw to the floor and did the pound-it fist thing with me two times in the next two minutes. Bing momentarily sat in stunned silence and in complete denial. You would have thought I killed someone, he looked so betrayed. He later gave me props about 20 times and put his facebook status as “Just got totally bamboozled. ….jeez.” Magnus, the dude helping me out the whole time, looked kind of like a sad puppy dog. My husband was mad that he didn’t win. One dude later said “Man. She had us all going.” Crystal simply exclaimed something like “I TRIED TO TELL YOU SHE WAS BAD!!!!!”  I know it’s just a game, but man. I honestly didn’t know whether to feel evilly satisfied or awfully bitchy. But game night did make me take note on a constant observation of mine. Girls are fabulous. And sometimes sneaky. We know things that dudes just don’t. We call each other out on our shit when guys don’t know how to. It’s this unspoken language and understanding, whether it’s real life or a game of outlaws and deputies. Though I will say I don’t really think there’s really a system of deputies and outlaws in the real girl world. Just a bunch of chicks doing their best to fight their own battle every day.

My good friend Emily came over the other night to relax and drink in my new hot-tub with me. We got in our bathing suits, grabbed our alcohol, and hopped in. We started our conversation off with boys and gossip and somehow ended up talking for over an hour about our problems with religion. The versatility was pretty neat. Upon leaving the hot-tub, I felt pruney and hot but also very intellectually satisfied.

On how others see me:

One of my best friends told me today at school, “You are like a seven year old boy.” She said this while laughing hysterically after I whispered the word “Poop” in our science class. I like the word poop. I don’t like what it is, but the word is so catchy to say.I constantly write it on my friend’s notebook as we sit through an hour of pollutants and biomes. I guess I am a 7 year old boy at heart, though I am actually a 21 year old girl in age. Speaking of being 21, my blogging dude friend Glen posted something about me on his wonderful blog the other day. It made me “Aww” and chuckle out loud, so thought I’d share. “I do want to point out that I have been getting quite hooked on Christina’s Little World, which reminds me about being young. Christina is 21, I have absolutely nothing in common with this girl’s life at all but I find her youthful outlook on life refreshing and it takes me back a few years, which is nice (she isn’t exactly rough on the eye either).” Awwwww/Chuckle.

10 thoughts on “Notes on People: Hot-Tubs, Card Games, and Poo.”