I have a lot of resolutions set out for 2011; In an attempt to both organize and complete them, I’ve set out to keep a running record of what I’ve completed each week. I’m starting a little late but will try to keep an update every weekend of what’s been done or what is in the process of completion. Hopefully this will help keep me motivated and focused. At the very least, it should be entertaining.

I quickly finished a book husband’s mommy let me borrow entitled “Year of The Fog.”  I haven’t been so hooked on a book in quite a while. A heart-wrenching and thought-provoking story of loss,memory, and hope; It practically pained me to put it down every time I had to go to sleep. A couple of favorite quotes:

“The photograph probably had less to do with the real Ramon–the man I did not love enough,the one I left–than with some idealized version of him….the image I’ve created of Ramon in my mind is not about the subject so much as it is about the person I was when I knew him.”

I started this class on Tuesday, and thus far it has been both a learning and fun experience. I’ve been showing off my few ‘moves’ to practically anyone who will watch, and am even learning a few Korean words. Kamsa-Hamnida! I just said thank-you to all of you! The inflections remind me of ‘Feliz Navidad’ every-time I say it, so the word automatically brings me happy and festive feelings. 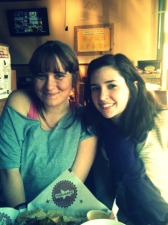 I’ve been referring to an application on my phone called “Living Social” which has a list of 365 things to do in Austin. Texadelphia was on here and it just so happens there’s one about 10 minutes from my house. I went with a couple of girlfriends after Martial Arts, obviously in order to get back all of the calories we had just lost. I opted for “The Texican” and my mouth is watering as I type it out. A delicious cheesesteak topped with jalapenos,mozzarella, and queso on the side; Gah,I can’t wait to go back and get another.

Downtown Austin on 5th and Guadalupe; This place was really something else. The bartenders are all drop-dead gorgeous, the country dancing is amazing, and we even encountered a topless lady. I brought a fun and intermingling group. I had introduced

my friend Crystal to friend Deesh once before, and they have now become good friends as well. I’ve learned from the two of them becoming buddies that I talk maybe too much. Deesh asked Crystal how her and I became friends and she told me that she informed him, “Christina talks a lot. I probably wouldn’t have ever become friends with her if she didn’t talk so much.” Later, Deesh informed me I could have a long conversation with a pigeon.  Oddly enough, I take these things as compliments. The whole night was pretty splendid. We did a lot of drinking and dancing. I think I danced with most everyone, (except for friend Bing, who was too intoxicated to do much at all) but Crystal was probably my favorite dance partner.  For an Asian and a white girl who has no dance or coordination skills whatsoever, I think we did pretty good at making up our own country dance. We watched others on the dance floor and eventually came up with our own moves, which mostly consisted of giggling and twirling each other around in circles. You may wonder why a diverse group of people who mostly don’t know how to country dance choose a place consisting of mostly country dancing, Hmm? Well. This brings me to my next completed resolution.

Yes, I did it. Not once, but three times,actually. Two days later my whole body is aching in places that I didn’t even know could ache, but it was most definitely worth it. The thrill of the crowd screaming as you get thrown around mercilessly by a bull that is not even real is definitely an exhilarating experience. The first and second time the bull disposed of me pretty quickly but the third time around I felt fairly acquainted with my new friend. This meaning I held onto him for as long as I possibly could before half-jumping/half being thrown off. I’m proud to say that my metaphorical balls are a tad bit bigger now. And kicking another thing off my bucket list feels pretty nice as well. Ahem.

Me on The Bull: 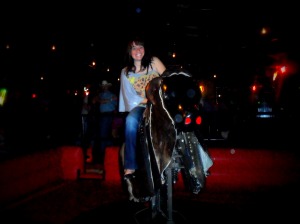 Me off The Bull:

It’s been a good week.

13 thoughts on “Mission Resolutions:Week One.”