Last week, I went out on a whim and auditioned for a local country radio show’s open casting call. I sent in a less than 1000 word essay and a 60 second sound clip saying why I should be Austin’s next cohost on KVET. To my surprise, two days later my sound clip actually made it to their website. A night after this, and to my absolute shock and excitement, I was stalking a friend via facebook to see that her mom had said this:

“Is Christina trying to get a job as the new morning DJ on KVET? I just heard her audition tape & she was pretty good!…..They played it on air this a.m. and the dj’s seemed to really like her”

You should’ve seen me. I was jumping around all over the place with excitement and my husband joined in on the fun too. Now, I don’t really expect to get the job. I made a quick audio bit on my phone and typed something up in a total of probably about thirty minutes. It was one of those things that I would have been mad at myself if I didn’t at least try, but there are others who put a lot more time and effort into it than I did. On top of that, there are some professional dj auditions that totally blew my humble one out of the water. Still, this is awesome to me for three reasons: 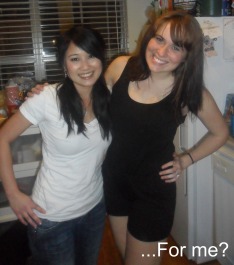 1. I grew up listening to KVET. My parents played this channel in their cars since I was a wee one. It’s surreal to me that my audition was played on a channel that I’ve been listening to since birth. Even more surreal that the dj’s really seemed to like me. Eek!

3. It’s always nice to be reminded of what an awesome support system I have. After posting my audition link on facebook, I’ve received an enormous amount of good feedback, sweet comments and playful teasing. I think some are even more excited about it than I am. The boys on my podcast even posted it to their facebook,telling everyone to vote for me. Aw. I just feel loved.

Ps: If y’all would like to, you can vote/listen to me here:Kvet Open Casting Call. I’m number twenty-two,and as usual sound like a really happy and dorky preteen.