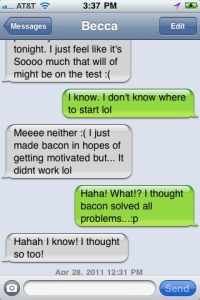 It’s that time of year for students again–where not even food and happy hours can fix problems.  (They help though, don’t get me wrong.) Finals time. I’ve been having recurring nightmares of making it to my last test only to remember that I hadn’t been to that class all semester and would inevitably fail. I rarely even skip class and I also had a dream last night that somebody lit me on fire, so luckily, my dreams don’t seem to be good indicators of my future. Regardless, I’m waking up with headaches and cricks in my neck that won’t go away.

Yesterday was my most stressful day of the week, with a 7:30 am final, another directly following, and my first trial run as a new nanny starting later that night.  I wasn’t exactly in the most chipper of moods when I headed over to my new job yesterday evening, but I put my happy face and a headband on that I hoped said, “Look at me! I’m a preppy,giddy, energetic 20 something who loves kids and bunnies!” (All of this is actually very true, I just wasn’t feeling all of  it at the moment.) (And wouldn’t you know it,they had actually just brought home two baby bunnies the night before I arrived?!) Considering this was my first time watching these three little girls ,ages ranging from one to nine, everything went really well until directly after bath time.  It was really no big deal when, a few minutes prior, one of the new bunnies wiggled out of it’s outside cage and was attempting to now jump to it’s doom (cement) far below. And It was no problem that in the seconds  it took to turn my back to save it’s little life and turn back around again, the one year old  was contemplating swallowing a cigarette butt. No. This was cool. Years waiting on customers has forced me to be a multitasker. I quickly saved the bunny and then grabbed said cigarette butt from baby, while also informing her that she could not eat that. Problem solved.  It was after bath time that trouble was presented.  My little friend didn’t want her diaper or her clothes on. The diaper was manageable but she was NOT having the one-piece pajama deal. In fact, I have never felt as hated as I did in the fifteen minutes it must have taken to get that thing on. Poppy, who has thus far been a complacent and bubbly little thing, was screaming at the top of her lungs. Tears were rolling down her face and she looked at me with as much disdain as I figure a 12 month old could possibly muster.  I was ungracefully attempting to wiggle her into this button-up footie thing, which honestly, I probably wouldn’t have been able to figure out if I was putting on a stuffed animal.  It was no small victory when I finally buttoned the thing up. Baby immediately stopped crying and I sighed a sigh of relief and grabbed her bottle. We both looked at each other as she peacefully and sleepily drank her after dinner snack, and I think in that moment she decided I wasn’t so bad.  Suddenly, nothing else mattered but the fact that I was holding this little girl and she was happy and didn’t seem to hate me any more.  Life was good, heck, it was perfect. Finals and the crick in my neck were far from my thoughts and, just as her mommy said I would, I fell in love with Miss Poppy a little bit. We had, after all, just gotten through our first changing together and at least somewhat successfully.

12 thoughts on “I fell in love a little bit last night.”