Ah! It’s been a crazy busy week. I’m feeling behind in the blogging world. Updates on the past 5 days: 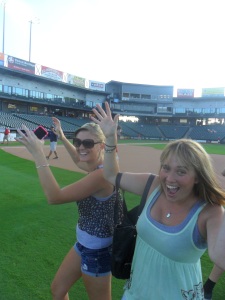 Hoping the marriage bit would get rid of him, I was relieved when he said his goodbyes. But he didn’t go goodbye. He stuck around for minutes later, apparently working up the courage to tell me:
“Um. I know you said your husband is around here somewhere, but I’ll give you my number just in case you want to go get coffee sometime or something.” He then proceeded to rattle off his digits, numerous times. He wouldn’t leave until I had recited his number back to him. I really must learn to become less polite.
In the past 3+ years, I’ve noticed that there are a lot of douche bags out there who don’t give a crap that I’m dating, or engaged, or married. The past few months it’s just become disturbingly more frequent. And now? TWO douche bags who don’t give a crap in one week?! WHAT is becoming of the sanctity of marriage? WHERE have all the decent men gone?!  (Besides the one that I took? ) Well. Thus begins the conquering of another goal in life. Learn to be a bitch. Who’s up for giving lessons?

19 thoughts on “Rain dancing, New semesters and Learning to be less polite.”