I road-trip to Little Rock before it’s even bright, and definitely very early tomorrow morning. My excitement is growing and I’m almost all packed. Here’s some catch up on my week, so y’all don’t miss me too much the next few days (But do miss me a little):

My friends Jenny, Deesh and I had a coffee date this past Sunday. It was Jenny and Deesh’s first time to meet, and they are both less of blabber-mouths than I. When I’m nervous about conversations not flowing, I tend to blab and word-vomit even more, so I was a tad worried. I had nothing to worry about! I still blabbed,because that’s just what I do, but the conversation was pretty equally proportioned, laughter was abundant and we never ran out of things to talk about. Despite everyone getting along so well, we still ended up with a rather awkward picture of the event. Such is life.

-I was nannying this past week when I got something in my eye. I have hard contacts and have to refrain from having mini-panic attacks every time I get something in my eye. It hurts. The kids and I were outside playing and I started twitching wildly and trying to get whatever it was out. I told the four year old boy I watch that I had something in my eye, as to keep him from thinking his nanny was dying. His response? “Oh. Is it a toenail?”  I wonder how many people have actually had toenails in their eyes before. Hm.

– I’ve lost 15 pounds! I’m feeling pretty small again and the compliments from others are especially encouraging. One friend made me happy and giggly by ever-so-sweetly calling me a “skinny bitch” last night. Unfortunately, my boobs are starting to follow suit. One bra has started falling off every time I run. Boo.

– This Thursday my Intro to Counseling class went to The Rock,a center that uses horses as therapy. Equinox therapy is an incredible thing, and it blew my mind how healing and intelligent horses can be. Between field trips and role-playing counseling sessions, this class has opened my mind and heart arguably more than any I’ve ever taken.

-I’m not much of a television person.  I’d rather be out doing something than watching for the most part. Even if I do find interest in a certain commercial, I never take initiative to record anything and don’t like tuning in too late into a season. It’s confusing and I’m too impatient to play catch up.  I do have two shows I watch consistently, the wholesome and heart-warming Jersey Shore and Gossip Girl. I hope you caught my sarcasm in that last sentence. Despite my reluctance to watch tv, I have recently found the joy of Netflix. No commercials. So many seasons. Tuning in at my own pace.  Sadly, I’ve used this tool to become rather enamored with Keeping up with the Kardashians lately. This isn’t something I’m proud to admit, but I’ve watched close to 40 episodes in about a week and a half. Where I find time for this between my hectic schedule, I have no idea. If this isn’t bad enough, I openly cried watching Khloe’s wedding episode. Another reason I don’t watch much television? I kind of have an addictive personality. I swear once this season’s over, I’m done. (Shh–That’s because there’s no more seasons left….)

Last night was potluck night at my house. Stuffed jalapenos, pineapple-avocado burgers, cheesecake…..Need I say more? I don’t think so. But I shall. Other highlights: Seeing close friends I hadn’t seen in months. My best dude friend surprising me by showing up unexpectedly. Finding the need to both kill and hug him the entire night. Having my “cousin” (actually aunt, but we’re less than two years apart.) “crash” my party. (It was her birthday. She brought me cake. Helped me clean up. Brought cool friends over with tons of wine.)  I’m a lucky girl. My friends roasted me last night for being so flaky in the past, which I definitely deserved. What I haven’t always deserved is for so many to love me so unconditionally, even if I’ve been kind of crappy at following through so many times before. But, deserving or not, I am surrounded by so many wonderful, forgiving, lovely people. I am getting better. Deesh pointed this out in my defense last night, and it makes me happy others are noticing. My goal is to soon be as good to others as they always are to me. 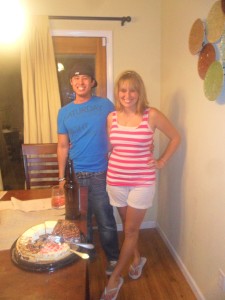 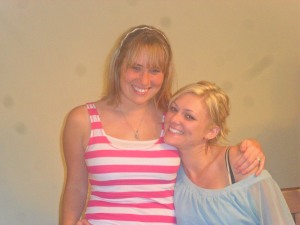 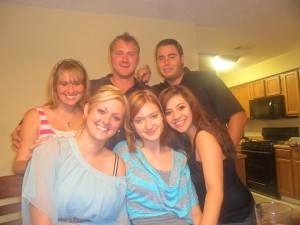 – Today I went to my parent’s house to watch some Sunday NFL football. Unfortunately, my team was defeated rather brutally, but it was nice spending time with my family just the same. I can’t believe how grown up my little siblings are. Joshua turns 6 this month and Kaylee turns 3 in December. I was in the delivery room when both were born, and I still see both of them as babies most of the time. They need to stop all of this getting older nonsense. It makes me feel sentimental AND really old.

17 thoughts on “Notes on the Week”