As some of you know, I’m on a comedy podcast with three dudes. I’m their news girl. I’m kind of a slacker news girl. To put it lightly. It’s become a running joke about me missing nearly every week for some kind of, in the boy’s opinions, outlandish reason.  They like to take it a step farther and say things such as, “Remember when you were gone last week, because you were helping build houses in Rwanda?” My actual excuse last week was because of a deaf volleyball game, which didn’t really help things. But all of their jokes aside, they are pretty great about understanding that I always have about a million projects going on. The truth is, I truly enjoy being the news girl, but I suppose I could participate a bit more. You would think I would want to. Our podcast is getting more legit. They even got Chuck Testa on a phone interview a few weeks back. I don’t know who Chuck Testa is, but apparently he’s somebody. When I asked Ryan (podcaster dude) who Chuck Testa was, he replied with, “You and I live in totally different worlds.” And when I asked my friend Deesh: 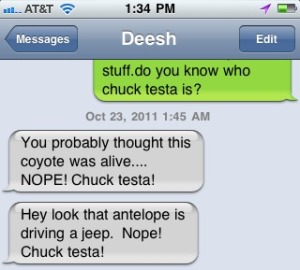 Well. Okay then. Google taught me that he has something to do with taxidermy and was featured on Tosh.O.

But what I’m getting at here is….I should want to be a more available news girl/friend. I know these things. Yesterday I decided I would show up, on time and ready to start a new era of me maybe being a perfect reporter of strange news. Once Ryan found out I was coming, he told me that there would be a potluck and that I should bring creamed corn. I knew he was lying, and even if he wasn’t, I wasn’t about to make any creamed corn. It’s enough that I decided to not go fly kites in Ecuador this Thursday, is it not?! So I countered his creamed corn comment by telling him to bring me flowers, for being such an amazing news girl. This was obviously a joke.  Much to my surprise, Ryan ACTUALLY bought me flowers, and presented them to me on the podcast.

Much to my surprise AGAIN, these boys had a list of each and every time I had skipped podcast, and my usually odd reasoning for skipping each one. And then appeared the scissors. For each time I skipped, they CUT a flower off.  I feel like this should be illegal, though at the time I was too stunned to do much of anything. I have received my share of flowers from dudes. I have never received flowers from dudes to then have them then snipped off in front of my face. I realized at this point that I had skipped podcast a rather large amount of times.

I was left feeling a mixture of a few feelings. Shocked. Heart-warmed that the boys bought me flowers. Maybe a little heartbroken but also extremely humored that half of my flowers were now merely flower petals. Extremely amused that my remaining flowers were in a vase made from a vodka container.

I heard the full story after podcast. Ryan, the occasionally sweet one, was at the store when he got my text. He decided he was going to be a nice dude and actually buy me flowers. He came home with them, and announced, “I got Kastina (his nickname for me) flowers!” Cody, the evil one, came up with the rest of the plan.  I couldn’t let them off TOO easy. Myself and the two other girls at podcast informed them that they were mean. Ryan had these things to say for himself:

“Kastina. How often do people do nice things for you? (A lot.)……..How often does your husband buy you flowers? (….A lot)……..You know everybody loves you. (I am pretty darn loved.) So shut-up!”

I can’t really remember if he actually told me to shut-up, but that was the gist of it. I do know that, despite their strange but lovable way of going about it, these dudes do care about me. So this is what I’ve got from the whole ordeal: Sometimes I suck and should maybe be taught entertaining little lessons. At the same time, when I’m being taught lessons, somehow I still am able to salvage out some flowers, sweet words and a funny story out of the whole deal. Makes me feel like a pretty lucky girl.

19 thoughts on “Life Lessons: Flowers, Scissors and a News Girl.”