Yesterday, hubby and I headed to Comic Con, which is basically a famous convention for nerds. Husband is definitely a nerd and he’s made me into a sort of closet nerd, so I bought us both tickets. It was hard to miss Robby’s or my giddiness.  He was excited about the comics and the action figures and the fact that you really

couldn’t walk two feet without seeing something Star Wars related. I was excited because people were dressed up like super heroes and because there were FAMOUS people everywhere. FAMOUS PEOPLE!!!! I must explain something to you now. It was a new years resolution of mine to meet a famous person this year, simply because I never have. Unless you count a guy who made salsa who was once handing out his samples at my local grocery store. That’s the closest I’ve gotten. As I’ve been doing really good with other resolutions, I had almost decided it would be okay to skip this resolution for now. I think I had almost unknowingly convinced myself that they–these famous folks—didn’t actually exist. That they only lived inside of my tv screen. So seeing them in person was a bit surreal for me. I had heard stars would be at Comic Con, but expected them to be hiding in private rooms that required secret passwords to get into. I was like a kid in a candy store when I realized they were out in the open. Most of them I didn’t even recognize–they were wrestlers or former playboys or from shows from the 90’s such as Buffy that I was

too young to watch back in the day. Husband would excitedly point one out and I would practically jump up and down with happiness, though I wouldn’t even know they were famous if someone wasn’t telling me. As ridiculously spastic as I was to be in the presence of stars, I had no real desire to meet a celebrity whom I had never heard of and couldn’t recognize. I considered saying hello to Hayden Panettiere as I least know who she is, but I’m not a fan and you couldn’t take pictures with her. When I explained this to my best friend via text, she replied with, “Ya, you don’t like her enough to just wanna meet her then have no way to show it off.”  She knows me too well.  It was kind of cool to stand three feet away from somebody on Cover Girl commercials though. Somewhere in this whole mix of picking my celebrity to meet, I saw him. The little boy (Chandler Riggs) from The Walking Dead, a popular zombie show husband and I watch religiously every Sunday. The fact that Robby was able to hook me on a zombie show at all should say something. It’s a good one and I’m emotionally invested in most of the characters. Just like that, I was experiencing my first 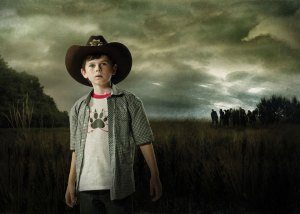 case of starstruck-ness. A bad case. I figure my reaction was similar to how a thirteen year old girl would react to meeting Justin Beiber. I mean, I have watched this child get SHOT. I’ve seen him on his deathbed, barely recovering from horrible wounds! I’ve seen him almost die and then push through! I’ve watched him escape the evil flesh-eating zombie creatures on many occasions! This kid can act, y’all. And now here he was, in person. RIGHT NEXT TO ME.  Most of you probably know that I’m usually stupidly brave. Shy is one of the last words that would be used to describe me. But I was bashfully nervous to approach this twelve year old kid. When I finally got the courage to walk up to him, this is how the conversation went:

Me: I…um….how much *looks at his manager for approval while they are both smiling, waiting for me to spit it out*….how much would it cost to take a picture with you?

His manager: Oh, he can just get a picture with you!

His manager: Here, I’ll take it.

Me,inside of my head (as in, definitely not out loud): OH MY GOD I AM SO HAPPY IS THIS REALLY HAPPENING RIGHT NOW!

The adorable little child then walks around and stands right next to me. He is more than a foot shorter than me and ten years younger, and I may or may not be about to hyperventilate from joy and shock.  Luckily, he is adorably sweet and my husband doesn’t laugh at me until later. After we take our picture (I GOT A PICTURE WITH CHANDLER RIGGS!!!!) I decide to kind of act like an adult. I shake his hand and tell him it was so nice to meet him. He responds with a smile and a, “Yeah, you too!”  If I’m not mistaken, he actually looked a little perplexed. It’s possible he doesn’t have too many 22 year old female groupies quite yet.

That my friends, is how I accomplished a new years resolution, met my first celebrity, acted like a preteen in a fan club AND experienced my first case of starstruck-ness. To finish off an already perfect day, I celebrated life with a few of my personal celebrities and shining stars. Pictures:

This morning my best girlfriend stopped by to pick up shoes she had accidentally left over last night. She mentioned that I was glowing, and thought it was because I had sex with my husband last night. Which I had. But I personally think my shine may have been the afterglow of meeting Chandler Riggs. If we’re being completely honest here. Now then. I must go make dinner before my favorite tv show (as of yesterday) comes on.