“Well I am almost twenty-three

Confused with all the lines in-between

They are dying to be read

(Tristan Prettyman- Simple as it should be) 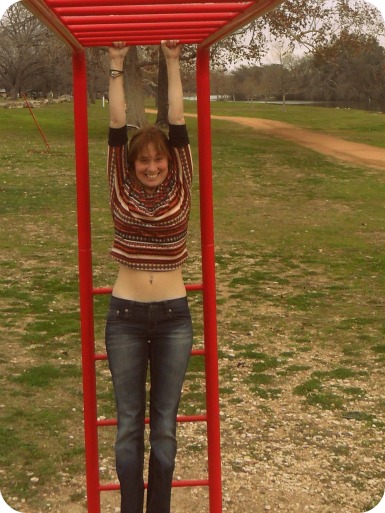 A good word to describe how I’ve been feeling lately would probably be, “inspired.” Long walks in the park. Checking-out a library book for the first time in years. Friends and music and long drives that make me think. In a couple of months, I’ll turn 23. It’s the first time in a while that I haven’t dreaded getting another year older.  The sound of the word “Twenty-three” is something I like rolling off my tongue. To me, it sounds happy and young and playful, but grown-up and more aware too. Or maybe that’s just where I feel I’m at right now, and I’m just placing it to the way an age sounds on my lips. Either way, a lot of things seem to be coming together for me lately. It’s as if the universe is conspiring, not against me, but for me. Yesterday afternoon, for example.

I adore my university, almost everything about it, but I dislike being forced to take religious courses that have nothing to do with my major. So I grudgingly made my way to my required religious course, where I saw our guest speaker. He was an Eastern Orthodox minister. He was wearing a robe. And, considering I’m not a church-goer, he looked eerily familiar. I sat down and tried to place how it was that I could possibly know this man, but wasn’t sure until he started speaking. Then I was near certain. It was Father Wilcoxson. Father Wilcoxson, who was my very first professor. Father Wilcoxson, who taught me English 1 at Austin Community College. Father Wilcoxson, whom I, at 18 years old, believed to have the first name of, ‘Father’, and just enjoyed wearing long, black robes. Father Wilcoxson who has been the most influential and remembered professor of any that I’ve had since. Father Wilcoxson, who knew all of my secrets. I remember walking up to this man after he had given the class our first assignment. It was to simply write a story about ourselves. I walked up to him and said, “I know what I want to write about. But….you have to promise not to judge me.” I think at this time I had become a little more aware that he may have been in a religious field of some sort. He informed me that he wasn’t there to judge, but to teach. This came as a relief. I was taking my first college course at the same time I just so happened to be  making some of the most questionable decisions of my life. I had recently been awoken from my sheltered existence in the form of waitressing. From this job sprung my first doozy of a relationship–A relationship that I knew without a doubt I shouldn’t be in, but was anyway. Being 18 and arguably the most naive,innocent girl to ever exist, ‘Love’ was all that mattered. Nothing and nobody else. Still, I needed the therapy of writing to someone who could read without judging, only grading. Father Wilcoxson offered this to me. Though I do feel that he kept his promise by never judging me, after the first paper he asked if he could speak with me.  My paper was good. The decisions I was writing about? Not so good. He gently informed me that the man I was with would not change, and that I needed to get the hell out of that relationship, asap (In different words, of course.) But I didn’t. I did, however, continue writing about it. By the end of the semester, he was taking me aside again, informing me that this relationship was no good and that it had to stop. I still wasn’t listening. And then I never saw him again. That is, until yesterday.

It’s a very funny feeling to see someone who knows you only as the girl you were four years ago. Because I see that girl as a story. I see her as someone who existed in some kind of parallel universe, a ‘me‘ that existed only in some far away land. I know she was real, and I know all about who she was and what she did, but I don’t think of her as being the same person that I am today. We’re too different. We shared bodies and memories maybe, but she’s gone now. The wiser, more mature, much happier me is here. I thought all of these things until about 24 hours ago. Seeing Father Wilcoxson standing only feet away from me was a mind-altering experience. My past was meeting my present. I couldn’t sit still. I wanted to wait until after class to speak with him, but I just couldn’t. So, in between all of my classmates religious questions, I finally raised my hand and blurted out:

“This is totally besides the point but….did you use to teach classes at ACC?”

Me: Yes…Yeah…Wow…You taught me English 1. (I was flustered at this point.)

Father Wilcoxson: Okay. Yeah. Did you…I hope I gave you a good grade?

Me: Yeah…you gave me an A actually!

Me: No,no…I was actually thinking you looked younger.

After this whole exchange, the whole class was laughing and my current professor’s face was bright red with his own chuckling. Despite the amusement we brought to the classroom, I knew I wanted to end things on a more serious note with him. I waited until class was over, and he came to the back of the room to throw his water bottle away. I told him that he was the most influential professor I’d ever had, that he helped me through a lot of tough things at the time and that I had been married for 2+ years now. I also thanked him about fifty times. I wasn’t sure what he would remember about me, and wasn’t about to tell him, but did at least want to let him know that I was in a much better place now. But somewhere in our conversation he asked me, “Didn’t you work at a restaurant?” And I couldn’t help but laugh a little bashfully, realizing that he remembered most everything.  He seemed genuinely happy for me, and the place in my life where I’m at now.

To me, seeing Father Wilcoxson was a lot like closure. It was as if that chapter of my life from four years back was finally closing. It was a realization and an acceptance that the past me and the present me are the same me. It was the ability to see, before my eyes, a part of my life that has come full circle.  It was the knowledge of how far I’ve come and of how wonderful it is to be where I’m at right now. And it was this incredible, unforgettable feeling of being able to tell someone from the past who undoubtedly helped shape my present, that their part in the book of my life helped aid in reaching a happy ending.

14 thoughts on “That moment where you get to tell your past that your present turned out just fine.”