I am simultaneously exhausted and ecstatic.

Firstly, let me just announce, I GOT A ROLE IN THE SCHOOL PLAY! I still can’t really believe it. I’ll be playing a bitchy/smart-ass waitress in one of the 5 ten-minute shorts Concordia is performing this semester. This may or may not have to do with the fact that  I auditioned as a bitchy/smart-ass McDonald’s employee. This particular play involves a chick who has been sucked into an alternate reality where she can’t get anything she asks for. The entire play is in a restaurant setting. Needless to say, I have a bunch of fun/humorous lines and I probably would have picked this role if I could have myself. I’m excited beyond belief but also preparing to make some sacrifices. The first being that I can’t spend Valentines Day with my hubby due to rehearsals and that a lot of other free time will now be sucked away (Shit starts getting really real the week of my birthday.) But right now, I’m kind of on a natural high and have decided it will all be more than worth it. At the same time, I’m pretty tempted to fall asleep on my keyboard right now. Trying to take on the world is kind of tiring sometimes. But a good kind of tiring. 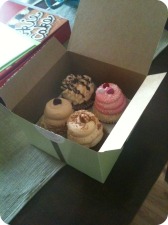 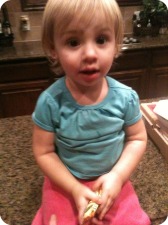 Secondly, husband’s birthday is today. He’s 29! My friends and I threw a little surprise party for him on Saturday. And when I say my friends and I, I mostly mean my friends. I spent the day with Robby’s family (Who spoiled us with cupcakes and stuff) and babysat that night, so I was short on time. Katie was more than happy to let me use her place, and Tessa bought cake and balloons (which she wouldn’t let me pay her back for.) Both of these dear girl friends prepared festivities and made everything look party-ready and perfect. They even wrote some of Robby’s token sayings all over the balloons. (IE; “F***ing A!”) Husband, being consistently late to everything (One of the reasons I may kill him before he’s 30…),showed up an hour late.  My group of friends and I sat in the dark for 60 minutes, talking and giggling and once, accidentally surprising the wrong peeps. We had a blast waiting for my tardy dude to show up.

Last night, my friend Priscilla surprised me with a carton of ice-cream and we had a girl’s night of wine, dramatic tv shows and chocolate chip cookie dough ice-cream.

Today at my nanny job, I accidentally fed the two year old artichoke dip. No chips included. I thought it was pasta. Afterward,I brought hubby home some presents, studied and did my 4 days a week ab-workout routine. The boy and I just got home from Mexican-food (His favorite) date night.

Life is really good. I need a nap. But naps can wait. Life cannot! Now excuse me, while I watch a movie with the birthday boy and hopefully do not drool on him whilst snoring.