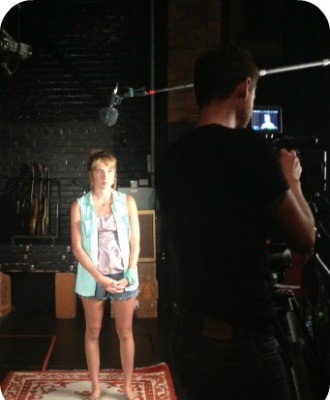 If you follow my blog, you probably know by now that I was cast as myself in a U by Kotex commercial in May. You may also know that, less than two months later, I was flown to Detroit on an all-expenses paid trip to film a second commercial. It’s been completely nuts. But the best kind of nuts. (Hee. Hee. Nuts. A male anatomy euphemism to describe a feminine care commercial I took part in. I really amuse myself sometimes.) Er….I digress. Here are the details I haven’t quite got around to sharing yet (With pictures! And captions!): 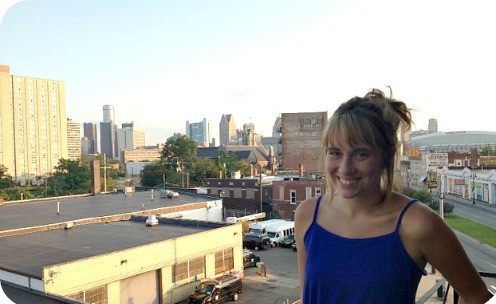 (Above: View of Detroit after crawling out of an apartment window) 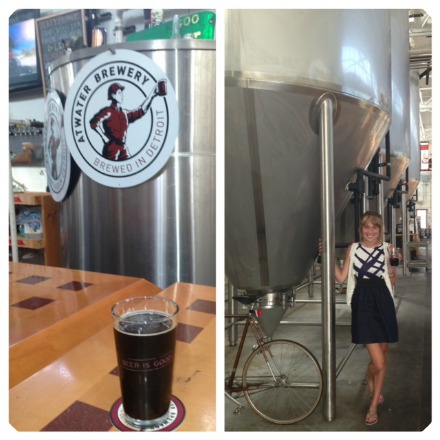 (Above: Arguably the coolest brewery ever, as one gets to drink their beer next to all of the brewing machinery.)

In the first set of commercials, there were five of us who were cast in “Demo Diaries.” Each of us got our own 2-3 minute online commercial. Because my product is the only one that hasn’t been released yet, I’ve been able to to watch the rest of the Demo Diaries before mine airs. Let me tell y’all, I was completely floored by the talent, beauty and personality that my fellow U by Kotex girls possess. I still feel honored and a bit awestruck that I got to be amongst this group. Now take that feeling and multiply it times about a kabazillion when I found out that I was the only one asked to join the production team in Detroit. Here’s the thing—I’m a confident girl, but realistically so. I know where I stand. I’m attractive, but not drop-dead gorgeous. Due to my years of homeschooling, I have this perma-awkward thing going on, but I’ve managed to usually pass this off as more cute than creepy. I’m goofy and outgoing and I’m kind to people, which I think makes me generally likable. So though I was pretty surprised when I found out I got cast in the first commercial, I wasn’t flabbergasted (That is such a fun word.) But it definitely blew me away to figure out that the production team considered me the favorite of this group of lovely, gifted young women. Still….what is that saying? About not looking a gift horse in the mouth? Yeah, I wasn’t about to do that. 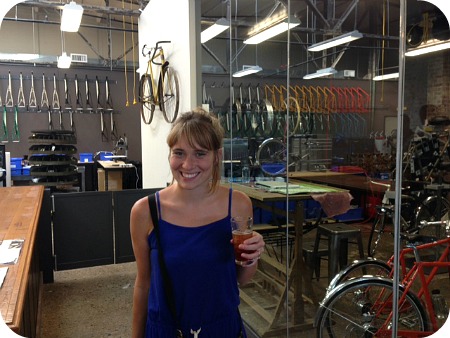 (Above: Party at a bicycle/watch making shop)

So I went to Detroit and had one of those weekends that made me feel like I was dreaming, or in a movie, or something. As a rather long side note, I must note that I was extremely taken by this city. It’s now on my top five, and maybe even top three of places that I’ve traveled to. I know it’s not in the best of spots right now, but I’ve always had a thing for the underdog. I loved that nearly everyone I talked to in Detroit was actually from Detroit, and how proud they were of that fact. (I think I appreciated this even more, being one of the rare Austinities that is actually from Austin.) And it wasn’t that they didn’t know any better or didn’t travel frequently. It was just that they saw, and luckily shared with me, the beauty and uniqueness of their city. I loved seeing a run-down, vacant building next to a small strip of renovated, classy ones. I loved going to a sleek, upscale restaurant in the middle of a poor neighborhood. It wasn’t at all depressing to me, but rather hopeful and inspiring. I’ve never before seen a city with so much potential. I fell in love, and I fell hard. 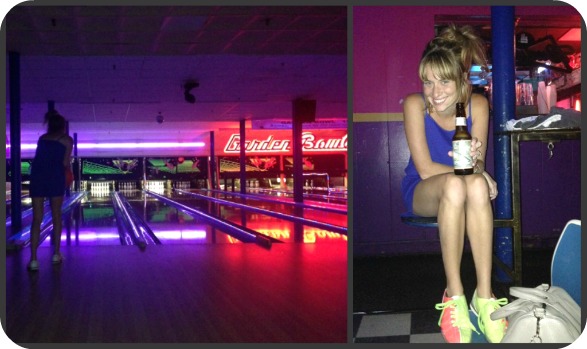 (Above: So much yum FOOD! And pretty coffee! And The oldest bowling alley in the US)

As I’ve mentioned, I flew first class and stayed at the MGM Grand and filmed on-stage at the Fillmore and was shown around the city by a production team that wouldn’t let me pay for anything. (Special thanks goes to Ed, who gave me an incredibly authentic tour of Detroit and didn’t once complain when I made him stop for multiple potty breaks.) I played dress up with a makeup and wardrobe artist and sat in on a meeting where everyone looked over pictures of me in different outfits. (So weird.) As I haven’t yet mentioned, the second commercial I was filming isn’t exactly a commercial. It’s actually a set of video clips that are going to be played on gigantic screens at the Bruno Mars and American Idol tours.They’re meant to be both a form of advertisement and a way to entertain the crowd pre-show. When I told my best friend about this, she told me my life had come full circle. I’d agree. See, when I was a young teenager, I was absolutely obsessed with American Idol. Obsessed is actually quite an understatement. I frequently fantasized about being a judge and convinced myself I was going to marry Ryan Seacrest. (The production team found that bit especially humorous) I once had a serious argument with previous mentioned best friend about which one of us liked Paula Abdul more. No, Really. I have journal entries about such things. Funny how sometimes the past really does meet, or at least interact with your present. Crazy how former dreams can occasionally come to fruition in your present life. It is both amusing and insane to find out that, 10 years later, I am going to be featured on mega-screens at the American Idol tour. So fourteen-year-old me, this may be a bit belated, but this one’s for you. Here is proof that sometimes those big, far-fetched, seemingly unrealistic type of dreams that filled your notebook really can come true. Sincerely, your twenty-four-year-old self and your menstrual cycle.