To kick January off with a yeast-fermented bang, my hubby and I recently took a little road-trip to Seguin, Texas to enjoy some beer tastings at Seguin Brewing Co.

I’m sure I’ve driven through Seguin multiple times over the years, but this was my first time to slow down and visit this lovely little city. My husband hadn’t been either, so it was exciting to go into this blogging adventure with my person, neither of us knowing exactly what to expect.

It was even better that the experience completely exceeded any expectations I could have had. 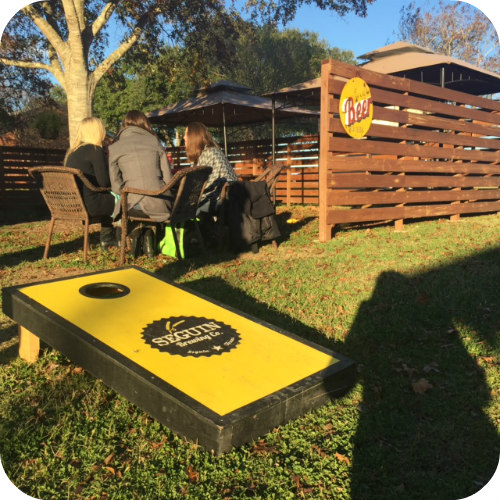 Seguin Brewery is, as I told the brewery-owner multiple times, so charming.

Before even stepping inside the brewery itself, I was sold. There were couples and little ones and groups of friends just frolicking about. You may think to yourself, “Christina, really? Frolicking? Why do you always have to be so dramatic with your verbiage?” But GUYS, I looked it up so you don’t even know. Ahem. The definition of frolicking is to, “Play and move about cheerfully, excitedly, or energetically.’ This is exactly what was happening. But with beer in hand, so even better.

During the quick but informative tour, I had a chance to hear about all of the care and dedication that goes into making their beer. Seguin Brewing uses a mixture of both old and new brewing techniques to create the most unique of beers. They managed to give me my first IPA that I actually enjoyed. Usually the bitterness of the hops is too much for me, but this was my first ever Black IPA. It was still a bit bitter, but I was okay with this as it was a much darker brew with hints of coffee. My taste buds were intrigued and happy. 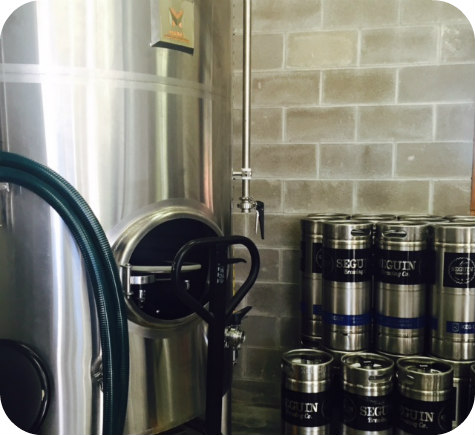 The ‘tastings’ themselves were actually three very generous pours of beers, and I was extra excited to find out that we got to keep the adorable glass that the pours came in. The hubs and I actually used them for our strawberry margarita, Connect 4 and Making A Murderer date night on Friday. So the glasses are quite versatile and also I am the reigning Connect 4 champion, if anyone was wondering.

Moving back to the brewery, I was also smitten with the open and inviting atmosphere that the lack of doors created. I loved that the outdoor and indoors were united, as the outside was where so much of the magic happened. There was a huge Jenga table and giant lawn chairs and laughter all around. There was a chill in the air and smiles on the faces of all nearby. My husband owned me at a game of washers, but I was too giddy to even care THAT much. Seguin Brewing was overflowing with magic and happiness and BEER. Can there be a better combination than this one?!

The fun-loving owners also suggested eats for consuming after the brewery, which gave Robby and I an even better look at the enchanting, cozy town that is Seguin, Texas.

In closing, I also loved seeing the motto featured on their website.

(Note: My husband and I were given the tour and tastings at Seguin Brewing free of charge, but I was otherwise not compensated for my review. All opinions expressed are all mine!)

Leave a Reply to Christina Does It All Cancel reply